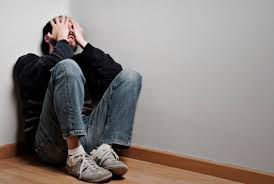 Hallucinations are perceptions in the conscious state without apparent stimulation of the senses. The quality of the perception felt by people with very clear, substantial and in fact came from outside the room. This definition can distinguish hallucinations with dreams, visions, illusions and pseudo-hallucinations (not the same as real perception, but not under controlled conditions). Examples of this phenomenon is that a person experiencing visual impairment, where he thought he saw an object, but other people's sense of vision can not capture the same object.

Hallucinations can be divided based on the senses that react when these perceptions are formed, namely

1. Risk for Injury: self, others and the environment related to auditory hallucinations.

To reduce the level of anxiety, panic and fear in patients affected by hallucinations, preferably at the beginning of the approach is done on an individual basis and keep your eye contact, if possible the patient in touch or hold. Patients should not in isolation either physically or emotionally. Each nurse entered the room or close to the patient, talk with patients. So also when the patient should be told to leave. The patient was told the action would be undertaken.
In that room should be provided the means to stimulate interest and encourage patients to get in touch with reality, such as clocks, picture or wall hangings, magazines and games.

Often patients refuse medication that is given with respect to stimulation hallucinations in receipt. The approach should be persuasive but instructive. Nurses must observe in order to give the right drug at the telannya, as well as drug reactions are given.

Explores the problems of patients and help resolve existing problems

Once the patient is more cooperative and communicative, nurses can explore the patient’s problem which is causing hallucinations as well as help overcome existing problems. The collection of this data can also be through the information the patient’s family or others close to the patient.

Patients in whom enable themselves to perform physical movement, such as exercising, playing or conducting. This activity can help steer patients to the real-life and cultivate relationships with others. Patients in whom scheduling of activities and choose appropriate activities.

Involving family and other officers in the process of care

Patient’s family and other officers should tell about the patient data in order to have unity of opinion and continuity in the nursing process, for example from a conversation with the patient in the know when it is alone, he was often heard men who mock. But if there is someone else nearby voices were not heard clearly. Nurses advised patients not to be alone and busied himself in the game or activity that exists. This conversation should be in to tell the patient’s family and other officers not to leave the patient alone and advice that is given is not contradictory.